The No Barriers Foundation began with a book drive following a trip our Director, Kieran Roberts, took to Tanzania in 2014. After seeing the lack of resources some schools had in Tanzania and Zanzibar, we teamed up with some families in Manchester and sent children’s books to some of those schools. We didn’t intend to go any further than this… until photos came back from the schools. 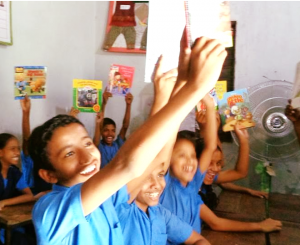 Children receiving books at one of our first partner schools.

The excitement of the children – many of whom were reading brightly coloured books for the first time – spurred us on to expand the book drive and resource more schools. We set up and named the charity, believing that education can remove the barriers which trap people in poverty, and we began working with schools in Asia, Africa and South America.

Whilst we sent thousands of books to our partner schools, we were always asking teachers for their feedback and they told us that for what we were spending on shipping books, we could be sponsoring teachers and even building classrooms. We were also sending books written in English written by Western authors. This sent the wrong signals to the children we were trying to help.

This led to a significant shift in our thinking and our work which maybe should have been obvious from the start: local people had the expertise and all they were lacking was the money. From then onwards, we’ve approached schools, asked them what they need and sent them the money to do it. This has meant new classrooms built, more teachers hired and new clean water facilities installed. Rather than handouts, we empower local people to lead the changes in their areas. This is the first classroom we sponsored in Mangochi, Malawi in 2017.

Everyone at The No Barriers Foundation works on a voluntary basis and we’re a charity run by teachers for teachers. This also means that 100% of the donations we receive are sent straight to our partner schools. If you would like to find out more or get involved with what we’re doing, please email [email protected]